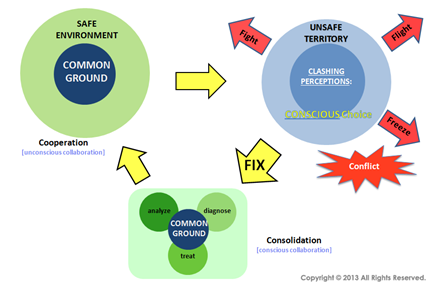 Conflict is a normal and necessary part of healthy relationships yet is is one of the greatest challenges for most leaders. Some leaders completely avoid conflict at all cost and other leaders embrace it every chance they get ... which in turn, causes people to avoid them. As leaders we must learn to be confident in leading ourselves and others through proper conflict resolution. When a leader mismanages conflict it can harm relationships, break down trust and have long term results on projects… ultimately hitting the bottom line and affecting the entire organization. On the contrary when conflict is handled in a respectful and positive way, it creates the opportunity for the following:

Through learning the skills you need for successful conflict resolution (which includes managing conflicts between your team members as a mediator), you can face disagreements with confidence and keep your personal and professional relationships strong and growing.

Visionary Leaders are often identified as innovative, out of the box thinkers, risk takers and able to see the possibilities for the future.  While all of these things are typically true of visionary leaders, they show up as outward attributes that make the visionary leader successful. These things are the aspects of the process that goes on internally within the leader individually. There is another key aspect to being a visionary leader that does not get as much attention or "flair."  This other aspect of visionary leadership is knowing how to empower others.  This attribute of empowering is not only essential to one's development, but it is also important to the success of relationships.
No video selected.

What will you be known for in your organization?

PERSONAL BRAND . . . a trendy phrase or something of value? We’re all very familiar with corporate brands; Coke, Disney and McDonalds to name a few. But what about a personal brand and do you really need to be concerned about having one? Whether you are a student, searching for your next job or already employed, it’s important for you to be able to articulate your unique value proposition.

View this engaging session to learn:

Have you ever given or received feedback and it did not turn out at all the way you expected? In this webinar we will explore the SBI feedback model. This model is a powerful and useful tool in leadership and life for giving and receiving feedback in a safe manner. SBI is a model designed by the Center for Creative Leadership for self-evaluation and giving feedback to others.

SBI is an acronym that is defined below:

I was looking for a particular book for a client and during my search in my library of way too many books, I spotted the book Art of Possibilities. I read it several years ago and have often recited some of my key learnings to leaders that I thought could benefit from Ben Zander’s approach to leadership.

As I thumbed through the book, one of Zander’s key concepts caught my attention – the downward spiral. That was it – the “thing” that my client was caught in. We had been discussing for months possible solutions for a very specific issue. Although we had brainstormed several potential solutions, it seemed each of them had major flaws or “just wouldn’t work”. I realized the leader was in a constant downward spiral and I had joined him. In case you’re wondering exactly what I mean by downward spiral – it is that tendency to get caught up in “what’s wrong” and “why it’s wrong” conversations thus spiraling into negativity. And when you are in a negative spiral, possibility doesn’t exist.

So how do you stop the spiral and get unstuck? Here are five ways to avoid the downward spiral: